Winters in Oklahoma are tough. One day can feel like summer, while the next can feel as if Snow Miser himself has taken over the state. For example, Oklahoma just had a 77 degree Valentine’s day, followed by a 25 degree day filled with winter storm warnings.

When I first arrived to the East Coast, a lot of different people would tell me “New Jersey was on the Sopranos a lot, there’s not THAT much violence and crime here, Sinatra is from Hoboken not NYC, and be prepared for winter.” The winter comment was always followed by a villainous laugh. I paid little attention to their comments though. I was too young during The Sopranos’ prime, I don’t really care for Sinatra except during the holidays, and Oklahoma winters were highly underrated. Sure, it may not snow a lot in Oklahoma, but instead Oklahomans experiences ice storms that cause families and businesses to lose power for weeks. However, I should have paid a little more attention to the warnings about the dreadful winters.

Luckily, I haven’t had to deal with too much snow or ice. However, the frigid temperatures have done insurmountable amounts of damage to my daily routines and weekend plans. Gone are the days of running outside or even thinking about skateboarding in the city on the weekends. At least until I read an article about Black Bear, a bar located in Williamsburg.

Black Bear recently teamed up with Huf and Levi’s to make skateboarding in the winter a possibility for NYC skate rats. I’m not the biggest fan of Huf, but their project has helped me ignore their overpriced shoes, weed socks, and trendy streetwear vibe. Huf and Levi’s built a skateable bowl inside Black Bear to be used during these harsh winter months. Along with hundreds of other skateboarders in the NYC area,  I immediately had to check it out.

I lucked out and visited the bar at a time when the bowl wasn’t very packed. I’m not the best transition skater by any means. The only type of transition I can skate is basically a 4 ft mini-ramp. And even still, I’m being overly kind about my abilities.

After signing a waiver I was able to finally skate for the first time in weeks. The bowl has tight transition, pool coping, and even an almost oververt cradle corner. After about 10 runs or so and only landing a few axle stalls, I decided to call it quits, enjoy a beer, and watch the others rip.

The best part of the night was when NJ native Fred Gall showed up. I’ve never seen him skate in person, but have always been a fan (who isn’t?). He ripped the bowl and managed to do a lot of impressive tricks on the tight transition before slamming hard  on his shoulder, causing him to head straight to the bar.

I later spoke to him at the bar while we both waited to get our drinks. He was super kind and answered all of my dumb questions. And yes, he did smell exactly like you think he would, like absolute body funk. But of course, Freddy doesn’t about any of that. He seems to only care about skateboarding, booze, and having a good time. Who can argue with that? Keep on ripping and being friendly Mr. Gall. Body odor is overrated anyway.

The bowl is skateable from 8pm-2am. It’ll unfortunately be removed on April 1st. 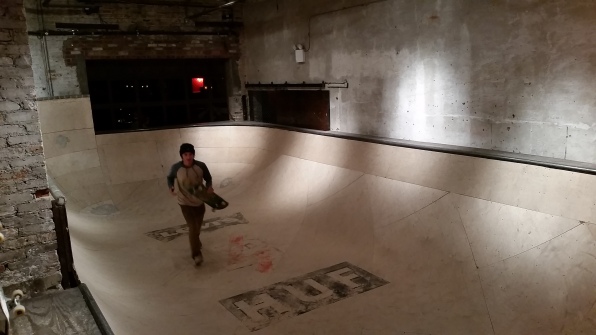